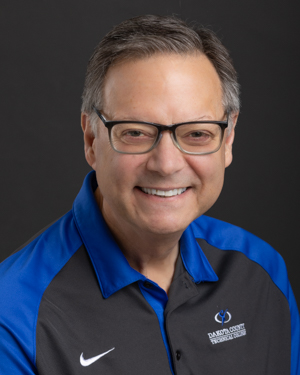 Scott R. Gunderson is the senior faculty member of the Business & Management department. He began teaching at DCTC in July 2000.

Scott has a master's degree in public and nonprofit administration from Metropolitan State University. He also has a Bachelor of Science degree in management from LaSalle University and a Business Management A.A.S.degree from Gateway Technical College.

He belongs to the National Rifle Association and has served as a law enforcement firearms instructor since 1987.

In 2003-04, Scott coordinated the research and development of the A.S. degree in business at DCTC. He followed up by redesigning the management for technical professionals A.A.S. Degree (now named Technical Management) in 2005. The following year, he researched and developed the A.A.S.degree in industrial distribution. In 2009, he designed a new degree for the college; the A.S. Degree in individualized studies.  This degree considers career exploration, transfer credits and life experience.  Also, he designed an A.S. in Business Administration, by collaborating with multiple disciplines to provide better transfer opportunities for students.

Scott chaired his academic department, and currently serves on the Academic Standards Council, the Faculty Shared Governance Council, Beyond the Yellow Ribbon Committee and the Credit for Prior Learning Committee.

Scott brings extensive managerial experience to his position at DCTC. In 1978, he became manager of three fast-food restaurants in southeastern Wisconsin and northern Illinois. In 1982, he joined the nuclear security and safety team at a nuclear power plant.

In 1995, he took the position of franchise manager at the world's second-ranked security company and was responsible for the state of Minnesota, including all nuclear power plants and a large number of prestigious companies. He was also an adjunct faculty member in the Wisconsin Technical College system.

Scott has number of personal and professional achievements, including Firearms Distinguished Expert, five-year teaching licenses in Minnesota and Wisconsin, and 1997 Franchise Manager of the Year.  Scott also was voted “Instructor of the Year” by students in 2016, and also received the DCTC “Spirit” award for his representation and contributions to the college.

Certified by the Institute of Certified Professional Managers, Scott currently serves on the institute's board of regents as Vice Chair in 2016, and Board Chair in 2017-2019.  He also served on the board of trustees for the Industrial Careers Pathways Initiative.

In 2007, he and a teaching colleague, Harold Torrence, received a grant from the Minnesota State Colleges and Universities system to research and develop a certificate and diploma program in Multicultural Supervision. The certificate and degree began fall semester 2008.  These programs are the only ones of their kind at a two year college.

He is certified as a Master in Prior Learning Assessment from the Council of Adult Experiential Learning. He is also certified in Accelerated Learning Methodology through the Wisconsin Technical College system.

Scott has been featured in "Jobs Section" articles in the Star Tribune on several occasions as well as a guest columnist for the Dakota County Business Journal.

In regards to his teaching philosophy, Scott believes in "making a personal connection with my students to ensure the best learning experience." He strives to be candid in the classroom, presenting real-life situations that his students will face as a supervisor or manager.

"I like to use humor to help develop an informal learning environment on serious issues," says Scott. "Learning is student-focused using accelerated learning principles. I am passionate about the human resource and leadership areas. If you take care of your people—employees and students—they will take care of you."

Scott has gone through cancer treatments on three different occasions. The experience taught him that life is too short to sweat the small stuff. "If you are unhappy, do something about it," he advises. He points out that many of his students are doing just that.

As for the best part of his job as a DCTC instructor, Scott values making a difference in the lives of his students by offering the most current information and best practices in the industry.

"The college administration has the drive to be the best and this is instilled in all of us," he says. "I thrive on change and in my role as an entrepreneur. No day is the same. I believe in getting involved and having some control over my own destiny."

Scott's hobbies and interests include serving as a Red Cross disaster volunteer for St. Croix County, Wis. He also enjoys golf, tennis and playing historical simulation games. He has been happily married since 1987 and has two college graduate “children”, one in management and one in social work. And of course he cannot forget his second love, an adorable beagle named Daisy.