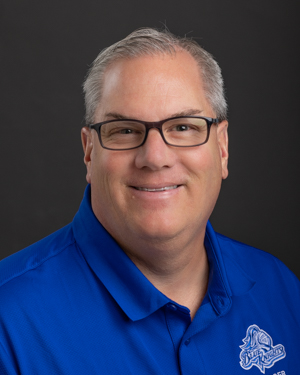 Mark Obarski is entering his first season with the Blue Knight Men's soccer program. Mark previously served as the Blue Knight Women's Head Coach for 3 seasons. Mark spent the last 14 years as the head girls’ soccer coach at Eagan High School. He currently teaches special education at Eagan High School where he has been employed for 19 years. Mark was named coach of the year in 2006 and 2010 by the Minnesota State High School Soccer Coaches Association (MSHSSCA) and was named section coach of the year four times, 2010, 2006, 2003 and 2000.  At Eagan, Mark compiled a record of 192 wins, 67 losses and 25 ties.  He served as President of the MSHSSCA for two years and has also been involved with the board for several years.

Obarski coaches club soccer in the south metro with extensive experience in the Valley United and Eagan Clubs, where he has coached a variety of age groups and served with each club at one time as Director of Coaching.

Obarski grew up playing soccer with the Valley United Soccer Club and at Apple Valley High School.  He played collegiately for Grand Canyon University in Phoenix, Arizona. He has a Master of Education degree from the University of Minnesota and a Bachelor of Arts degree from Metropolitan State University. Mark and his wife Barb have been married for 28 years, have 5 children, and reside in Burnsville.